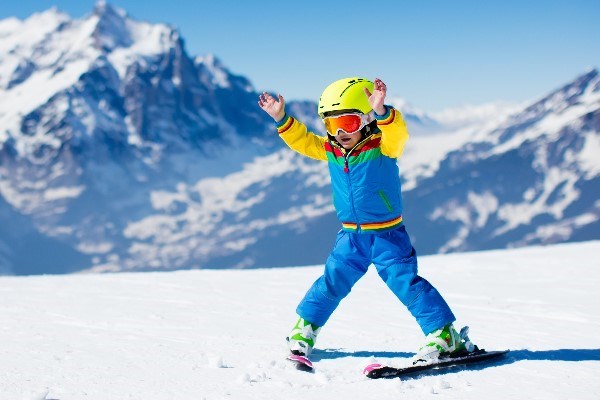 Ok, we’re a little biased, but as far as we’re concerned, skiing is one of the world’s most exciting, graceful and fulfilling sports. And even better, getting to a reasonable level of ability can be quick and easy, if taught well. With this guide, the team here at VIP SKI are aiming to illustrate the basic techniques of skiing so that you can swiftly become more confident and able on the slopes, after which point you can progress at your own pace. Because let’s be honest, done badly skiing can be dangerous, so there is nothing more important than laying the foundations well.

It may be stating the obvious here, but with skiing, balance is everything. Correct balance is what keeps you upright and out of the snow, where you should be, and moving forward at a safe pace. To begin with, settle yourself on flat terrain, and distribute your weight evenly, trying to keep your body weight above the narrowest part of the ski. Practise leaning forward gently, and side by side, so you become comfortable with the movement in your boots and how various body positions place pressure on the skis in different places.

When moving, your knees should be in line with your shoulders, and your shoulders pointing downhill. Most people will tell you that it’s important to bend the knees, but really you should be aiming to stand almost completely upright to begin with, and leaning gently forward so your shins press gently against your boots. It’s easy to make the classic mistake of leaning too far back, into an near-seated position, but when you do so, your body needs to work twice as hard to make a turn. If you’re correctly balanced however, skiing looks, and feels, practically effortless.

To get going, push off with your poles, keeping the skis parallel as you do so. The process of skiing on flat ground can be quite exhausting at first, especially if you have to travel some distance. Lifting the skis off the ground to perform a kind of ‘clown walk’ can help you move faster, but you risk an embarrassing fall. 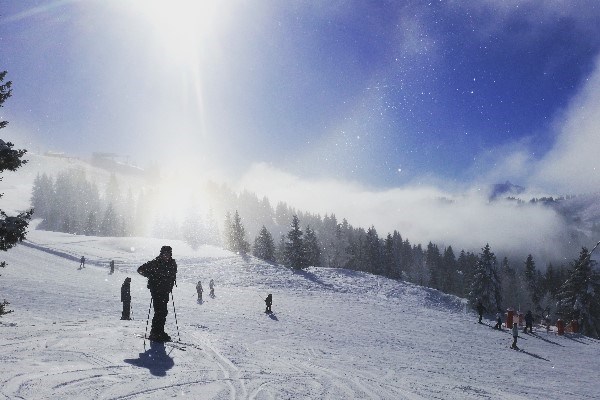 The Art of the Turn

Probably the most difficult part of learning to ski is mastering the turns, and when you first do it while going downhill, even on a gentle slope, it can be a little nerve-wracking, which is why instructors use terms like ‘pizza’ and ‘french fries’, to make it more fun for kids.

Almost everyone will start with the pizza turn, formerly known as the ‘snowplough’. Essentially, with the skis in a parallel position, you slide one ski over the snow without lifting your foot, pushing the heel outward while pointing the toe of the boot (and ski) inward. Then you bring the other ski into line, again without lifting your ski off the ground. It’s good to practise this a few times on flat terrain without actually moving, to begin, then try it while moving!

Now, it might seem a lot harder to do this while actually going downhill, but actually the opposite is true. Using a slope with just a slight gradient, you need to be moving parallel to the slope with the skis in the straight, ‘french fries’ position. Slowly moving into the pizza position, you put greater pressure on the lower of your skis, which will make you turn. Once you’ve completed the turn, you move back into the parallel ‘french fries’ position. You can expect a few wobbles and tumbles early on, but with a little dedication you’ll get it quickly enough. Now you need to learn the parallel turn!

Having conquered the pizza turn, you are now ready to start going a little faster. This is the fun part. One way to feel some speed is to drop into a tuck position, bending further at the knees, with your poles under your arms. Remember one of the most valuable skills in skiing is being able to judge the safety of your speed. If you’re not sure of the terrain ahead, always better to take it easy until you do.

Slowing Down and Stopping

Another essential technique of skiing to learn early on is how to come to a safe stop. Luckily, it’s very easy to get the hang of. You simply move your skis into the ‘pizza’ position, and then widen the angle at the back - the crust!- to slow down, with the edges of the skis encountering friction with the snow.

One golden rule of skiing is that when you stop, you do so with consideration for others. So, never in the middle of the piste if you can help it, but at the side. At the bottom of a run, if you’re part of a group, you need to stop at the back, to avoid the risk of a domino situation. And of course, if you’re heading towards a lift, you need to start slowing down well in advance, especially if you’re a beginner.

Getting Up After A Fall

This is among the hardest skills to master for a ski beginner but one that, let’s face it, you’re going to need, in spades. The trick lies in getting yourself into the right position before you attempt to get up.

And off you go again. Good luck! 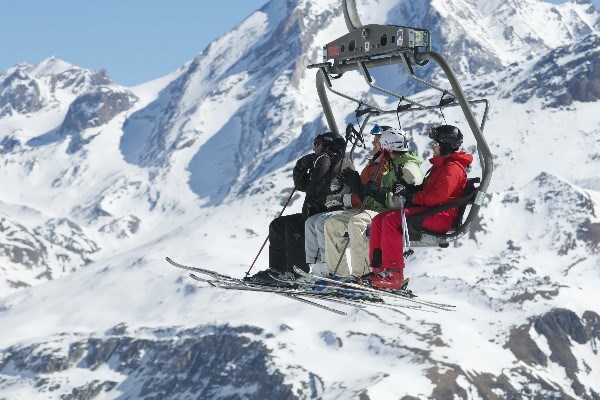