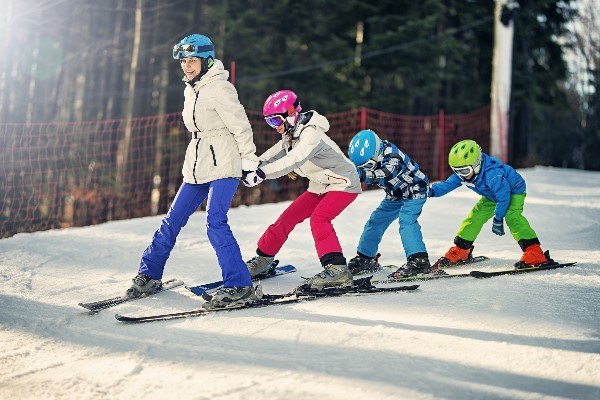 One of the first things that any good instructor will stress early in lessons is the importance of basic ski safety considerations when on the mountain. Safety is a key concern when taking your family on a ski holiday, but it goes far beyond simply wearing a helmet. Below you’ll find a rundown of core ski safety advice that should be kept in mind whether you’re a first-timer or a seasoned pro, because like all the best adventures, skiing also has its fair share of risk. 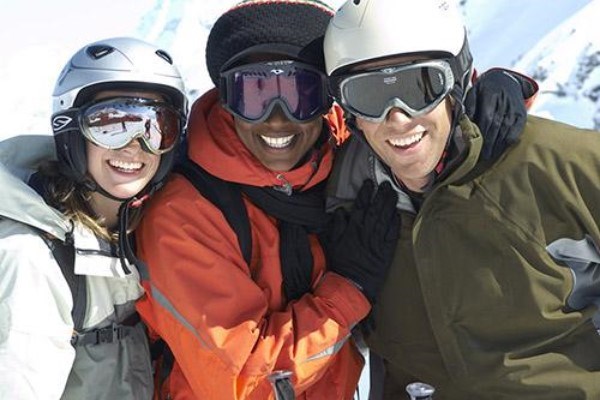 It probably goes without saying, but you should always use the right equipment for skiing. Boots should be fitted correctly, and your ski bindings should be adjusted by a professional. Furthermore, the type of ski you choose should suit your level of ability and experience, as well as the type of snow you’re likely to be encountering. If borrowing equipment from a friend rather than buying or renting your own, you should have it thoroughly checked and fitted in a shop all the same, just in case.

Helmets
You can never be 100% safe when skiing of course, but wearing a helmet will greatly reduce your risk of suffering a serious head injury. Strange as it might seem, it was not until recently that ski helmets became ubiquitous. In fact, just 10 years ago, probably no more than half the skiers you’d have seen would have had any more head protection than a woolly hat. But improved designs, reduced prices, and several high profile, awareness-raising tragedies such as those involving Natasha Richardson and Michael Schumacher mean that it is now quite rare to see anyone on the slopes without a helmet.

Body Armour
Modern ski body armour isn’t just designed to protect your back and torso - it’s also lightweight, and unobtrusive enough to hide beneath your jacket. Basic body armour is available for under £100, and is worth the investment if you’re prone to wiping out at speed, or simply want to get the maximum protection for yourself and your family.

Avalanche kit
Once your family has learned to ski at an advanced level, you may like to go off-piste once in a while, in which case it’s always best to be prepared for any eventuality. That means being fully aware of current and likely future weather conditions, and if possible skiing with a guide. Your standard recommended avalanche kit will include transponders, collapsible shovels and probes.

Ultimately, there is only so much that having the correct ski safety equipment can do. More than anything else, it’s sensible behaviour on the slopes that will protect you.

Always dress for the weather
On the mountain, weather conditions can change very rapidly, and it’s not uncommon for even the most experienced of skiers to be caught out. Packing for a ski holiday can be an artform but you should be looking to layer clothing, with an insulating mid-layer that can be removed and put in a backpack if necessary. Waterproof gloves are essential, and it’s sensible to bring both goggles and sunglasses so that you can cope with both sunny and snowy conditions.

Ski sober
Remember that drinking alcohol at high altitudes can lower the amount of oxygen getting to the brain, which is why so many air-rage incidents are blamed on in-flight drinking. Alcohol can lead to overconfidence, and getting sloppy with technique, leading to accidents, and so if you’re skiing with your kids, it’s doubly important to abstain. Instead of beer or wine at lunch, drink water or soft drinks and save the alcohol for the apres-ski. It’s also a good idea to carry reusable water bottles in backpacks so that you can all stay well hydrated throughout the day.

Stretch
One good way to help your family to avoid aches and strains while skiing, and cut the risk of more serious injuries, is to get everyone performing some light stretching exercises before and after. It’s also highly advisable to take regular rest breaks while skiing, pausing mid-run and for at least an hour at lunch, to catch your breath. 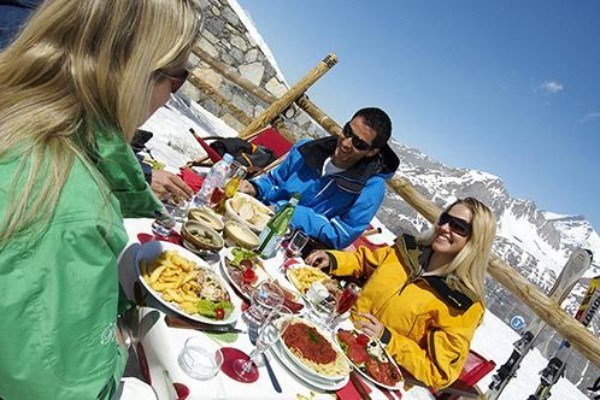 Respect others, and the mountain

Remember the basic rules of ski etiquette at all times, especially in areas of high risk such as lift queues, or when one piste joins another. There are several golden rules in skiing - always follow the line of the downhill skier; monitor your speed, and keep a safe distance from others, especially novices in lessons and groups of children.

Lift etiquette
In popular resorts, some lifts will usually have long, tightly packed queues waiting for them. When approaching a lift queue it’s vital to reduce your speed will in advance of reaching the end of the line or you could cause a major accident. Standard ski safety tips for lifts include making sure your poles are in one hand and your skis straight as you sit down, removing backpacks, and not raising the safety bar until just before you get off. 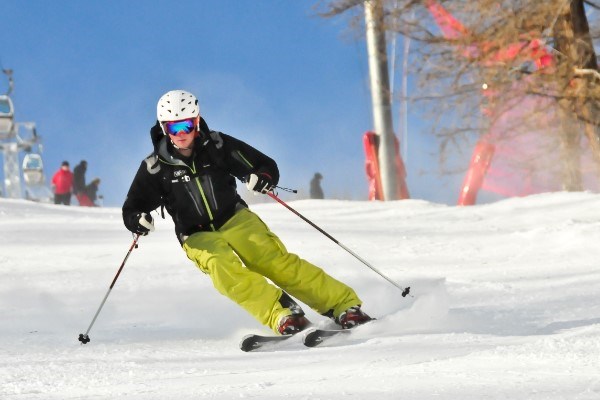 Being aware of your own abilities and not pushing yourself too far is something else that ought to come up early with instruction. Every year, many accidents are caused by skiers who try to tackle runs that are beyond their capability and end up in trouble. Pistes are clearly marked to denote the level of difficulty that can be expected, and maps are freely available too. If you do find yourself in a situation that you’re not confident that you can handle, slowly make your way to the nearest lift station.

Much of the above advice might seem obvious, but you would be surprised how often it is neglected. Just as many drivers will forget the basics of road safety over time, it’s common for experienced skiers to make common errors too. Parents have a responsibility when taking their children on family ski holidays to follow best practise at all times, as children will learn by example. And just as taking the odd lesson now and again can help you sharpen your technique, it can also refresh the memory on ski safety too.